Sign up for our Truly Personalized Plan (At Home Blood Test + Personalized Supplements) with No Cost EMI Benefits. Delivery might get delay due to Covid-19 restrictions. 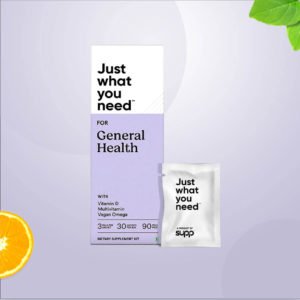 A complete 30-day Vitamin and Mineral immunity boosting kit to safeguard yourself in the flu season.
Each sachet is loaded with:

1 x Vitamin C is the most powerful immunity booster & antioxidant for you.

1 x Vitamin D reduces the risk of respiratory infections, including cold and flu.

Supp’s Immunity Boost is a combination containing Vitamin C, Vitamin D and Zinc that understands your dietary needs and provides your body the immunity care it deserves.

Better Immunity
Turns on the responsive genes and supports your immune system through receptors in your body.

Collagen Boost
Vitamin C ensures Collagen synthesis. It is the most abundant protein which provides structure to your skin.

A simplified health plan for your overall wellness.

Vitamin C is an essential nutrient for growth development and tissue repair. It helps in many body functions, including formation of collagen, absorption of iron, strengthening immune system, wound healing and the maintenance of cartilage.

Vitamin D is one of the many nutrients our body needs to stay healthy. It helps in absorbing Calcium, which then builds bones and keeps them strong and healthy. Severely low levels of Vitamin D can result in soft, brittle bones, muscle pain and weakness.

Zinc is needed for the body’s immune system to work properly. It plays a role in possible wound healing, promotes skin health and repairs thin and sparse hair. It also assists with DNA synthesis and stronger vision.

SKU: PPIM30 Category: Just What You Need Tags: Just what you need, Prepack